The first work of a memorable blog drawing is ….Ninja-Batman！

It was the movie that burned the heart of the boy(old farts) to the utmost!

The story started from Gotham City.

Dylan and Batman time-slip to the Edo period by the hands of Phantom Gorilla · Grod (cv. Koyasu Takehito)!
Batman and Dylan’s hot battle to be unfolded! ! ! 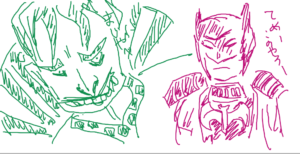 Batmans who were arranged in a Japanese style were raging and screeching narrowly screens!

The video expression can be said to be amazing.
Character design of Batman and Dylan, as well as appearance scenes, castles, accessories of the character, everything on the screen are Japanese style, Japanese style and Japanese style! What you can interpret Batman movies like this!

In the movie, not only famous Joker, but also Dylan who accompanied flowers to live-action movies such as two face and Hurley · Quinn all appeared!

↓ Main gorilla-kun.
I did not know, but it is a character design of the gorilla itself … lol

Just saying that Koyasu Takehito played the gorilla, it makes me laugh (sorry).

This gorilla follows a Dylan who flew in the Edo period and battle with Batman! Ninja, shuriken, sword, this battle has no choice but to tickle the heart of a boy (old farts) at the end that comes up to the robot. 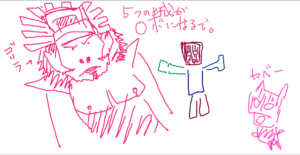 My favorite is catwoman!
The figure which changes belonging to Dylan camp, Batman camp is reminiscent of Mine Fujiko.
And I’m glad that Mr. Ai Kakuma-san’s glossy voice!

(I tried hard and drew it …lol)

There are no goods in amazon… I wanted to get catwoman goods… but I was sad.

Anyway, it was a wonderful movie!